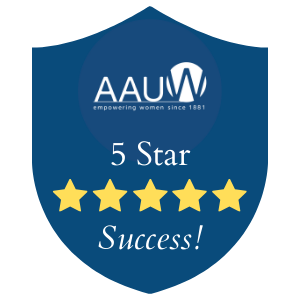 Why does it matter?

The pay gap has lifelong financial effects that grow over time, from the ability to pay for education and childcare to saving for retirement, impacting women in nearly every profession. The Work Smart program teaches women at all stages of their career how to negotiate their pay, resulting in improved financial futures for themselves and their families.

Print this WorkSmart flyer created by the Reston-Herndon Branch to post in your community for all to see!

Take the course yourself to be able to talk about it!

Branch Members, read all about it!

The program is designed to promote cohesion between AAUW national and affiliates and increase understanding and implementation of the strategic plan goals. National recognition allows AAUW National to acknowledge and celebrate affiliates that advance AAUW’s mission.

How can you help your branch succeed and be recognized?

Equal Pay For Women in 2017- Not in Prince William County, Virginia

While State and local governments all over the country recognized April 4, 2017 as Equal Pay Day, the symbolic day when women’s wages catch up to men’s earnings from the year before, this was not the case in Prince William County, Virginia. Board of County Supervisors Chairman Corey Stewart, along with Supervisors Pete Candland (Gainesville District), Vice Chair Jeanine Lawson (Brentsville District), and Ruth Anderson (Occoquan District), blocked the board from approving a proclamation recognizing Equal Pay Day in the county and would have “urged the citizens of Prince William County to recognize the full value of women’s skills and significant contributions to the labor force.” They felt, in part, that any discussion of a gender pay gap was a “political” issue, not fully based in fact.

Voting to approve the proclamation were Supervisors Martin Nohe (Coles District), John Jenkins​(Neabsco District), Maureen Caddigan (Potomac District) and Frank Principi (Woodbridge District) who also sponsored the proclamation. They understand that Pay inequality isn’t just a women’s issue; it is a family issue. Recent research has found that 50 percent of households with children include a mother who is either the sole or primary earner for her family.

You can hear what they had to say at the board meeting about equal pay for women at http://pwcgov.granicus.com/MediaPlayer.php?view_id=23&clip_id=2320, starting at eight minutes into the video.